You are here: Home / Dramatic Puc Fáda ends in a shoot out.

home / news / Dramatic Puc Fáda ends in a shoot out.

Twenty five teams took part in our third installment of the St. Stephen’s day Puck Fáda competition held down the Bridgetown road and concluded in a dramatic shoot out, to settle for first prize.

The course is a very daunting one, which this year, we started from Sean Sheedy’s piers, below O Connell’s sheds. The course was wet after heavy overnight rain, so the sliotar stopped instantly if he hit a roadside puddle.  After starting and the teams loosening out, the first major challenge was getting round the bends at Clifford House.  You could be brave and try to loft the bends, or play safe around them. Next, try crossing across the old Mallow to Fermoy railway line, without putting the sliotar into the field like Seamus Fox did, and this his home area.

If you manage to get a good lie, you have a decent chance of getting the sliotar as far as John Notter’s with your next shot and Jamie Magner did just that. We paused at Niall and Denise Hanrahan’s for refreshments, teas and coffee’s and a touch of alcohol if you so desired, and that gave the proud Tipperary man, that is Niall time to tell us all again about the great Seamus Callahan and Tipp’s great year. Also gave us time to look at what Santa bought for Daithi Murphy, a rebounder contraption, which must have tested the patience of Santa to get that down the chimney. Meant to aid your responses to a sliotar pucked left or right against it, I am told but will have to see in another day in action.  As the sliotar ran along the road, Gary Lane gathered a group of his friends together, and posed for a photo of them all together, to point out to their friend, Alex Notter of what he was missing, while his is over in Queenstown in New Zealand.

From Hanrahan’s, pausing to say hello to Jim O Kelly, then past Bartley’s, and up to the cross at Top Shop, the deep puddles here made it more daunting than here to now. Jack O Regan dissected the cross, Kevin Fox went over the cottage, and got a magical bounce on the road. Cian Lankford put the ball in the entrance of Julia Sheahan’s. Turning now, down past Dorgan’s, how Declan in Abu Dhabi would love to be taking part, but his brother Liam, did him proud. The crowd pushed on toward Monaimy castle, and Willie Fox here got an almighty shot that ran with the gradients of the road, half way down the hill. Alas some scuppered their chances with cruel bounces of Fiachra’s entrance wall. As the sliotars trundled down the steep Monaimy hill, Tommy Cremin at the bottom, stopped the sliotars running into the Tiddane River. Further care had to be taken now, as we were on a busier road, but all oncoming cars passed without incident and only good will. John Stafford in his van and hazard warning lights flashing made sure no car ever came up on the groups on the road in an unsuspecting way.

To circumnavigate the Blackwater bridge and its awkward entrance and exit takes a lot of science, do you lay up, and simply work out the angles like Eddie Cotter did, and then ricochet the sliotar off the walls of the bridge twice, on entry and exit to nearly make it to the finish line with an audacious shot, one that brought his team right into contention.

To the finish line, and Rory Lankford checking each of the score cards. There was no doubt about the juvenile winners, as Owen Magner, Eoin O Hanlon and their friend Declan Copps from Mallow were well ahead of the others, but bizarrely, there was a four way tie for the adult competition. Rory checked again, and he is good at that stuff as an accountant, and so, we ended up with a puck off.

Tommy Cremin took the four captains of the teams across the bridge again, into Nicky’s field, put down his jacket as a marker, and then, they had to cross the Blackwater again, to land the ball in the sand based training area where all the crowd was now looking on from.

Tommy had it judged to perfection, Mick Cronin got across the river, but only just to lay down the marker. Podge Cronin was short with his effort which landed in the raging torrents of the River, so we can get that sliotar back when it is washed up on Willie Fox’s inch field. Tadgh Moakley was also short, which was a travesty for his young team. Last up was Eddie Cotter, the new Christmas jacket came off, and he opened up his shoulders, and beat Mick’s shot by some 10 – 12 feet to win. 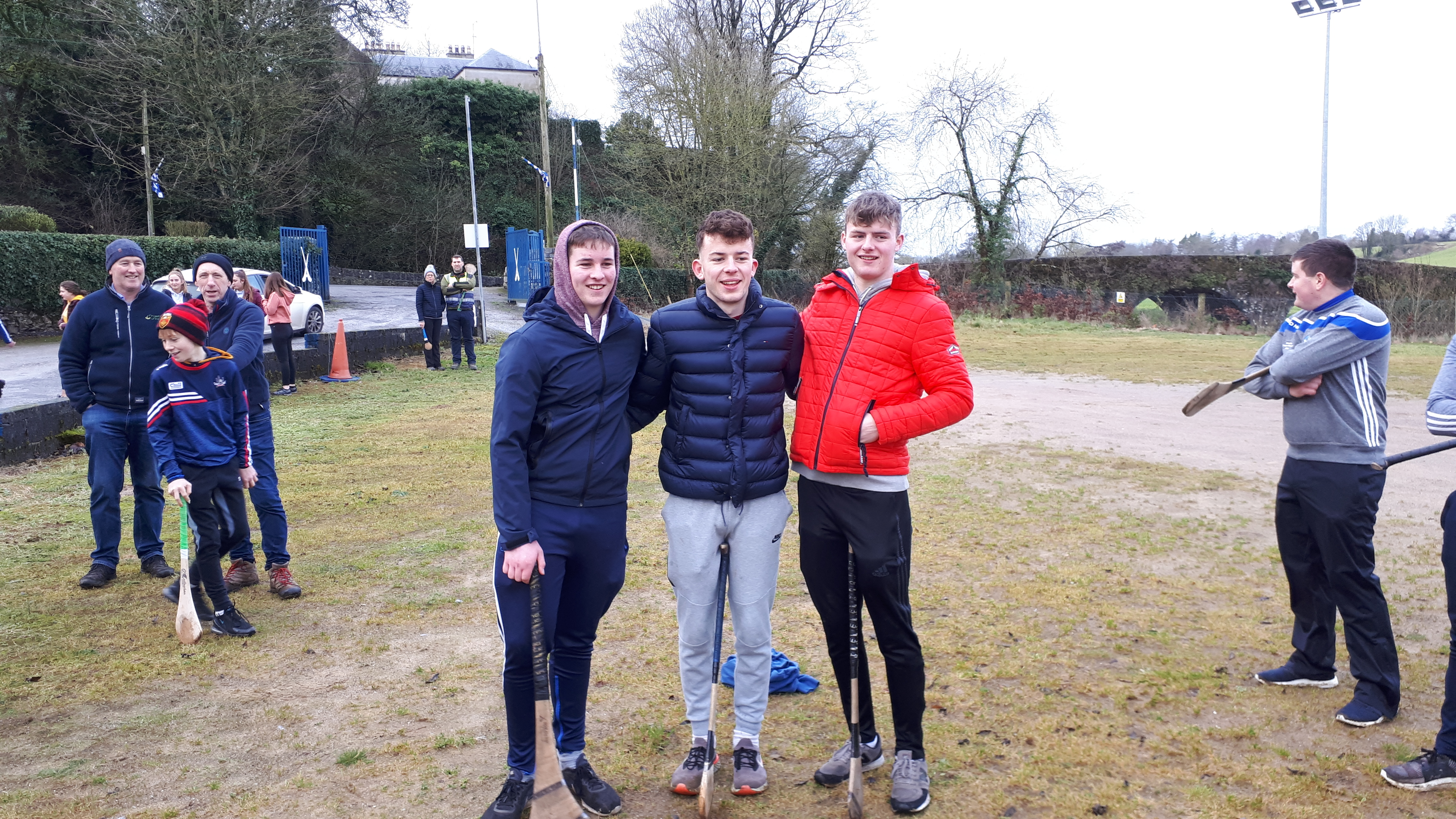 Sincere thanks to all that organised the event, took part, helped out and adjudicated at the event.

The next GAA event will be the juvenile table quiz in Magners bar, on Saturday, the 28th of December at 9.30 PM. Please support if possible, and a tip to all participants, brush up on Tipperary GAA odd facts and trivia’s. Niall, AKA. Mr. Slievenamon  is the quiz master. You have been warned.